The history of Irish service in the British Army from the 1600s to the present day in a special evening of talks, tours and displays

In this Museum Late event, held in partnership with The National Army Museum, we will be exploring the history of Irish regiments and Irish soldiers who have served in the British Army.

The exhibition is FREE to visit and will be held at: 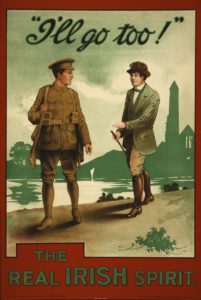 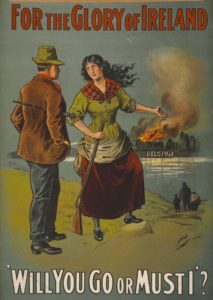 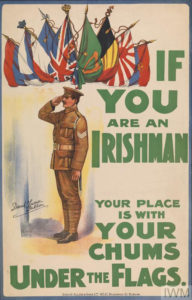 Irish Service in the World Wars

Join leading historians Edward Madigan, Joseph Quinn and Glyn Prysor as they discuss the experiences of Irish soldiers in the First and Second World Wars.

Delve into our archives to uncover photographs and objects relating to the Irish regiments and their soldiers.

Life of an Irish Soldier

See how the life of an Irish soldier has changed from the 17th century to the present day in this after-hours opening of our Soldier gallery.

View our special display exploring the history of Irish regiments and their soldiers. This pop-up exhibition marks the centenary of the disbandment of British Army units that traditionally recruited in southern Ireland until the creation of the Irish Free State.

Music of the Regiments

Join us as the Band of the Irish Guards performs live in the Museum with a mix of traditional and contemporary hits. The band will be accompanied by the regimental mascot: Seamus, the Irish wolfhound.

Pick up a few handy phrases and learn some of the fundamentals of the Irish language with our expert tutors. Or, if you’d prefer a musical skill, have a go at playing traditional Irish instruments like the bodhran and whistle.

About the National Army Museum

The National Army Museum is a leading authority on the British Army and its impact on society past and present. We examine the Army’s role from the British Civil Wars to the modern day. Through our collections we preserve and share stories of ordinary people with extraordinary responsibilities. We explore the role of the Army and its relevance today. 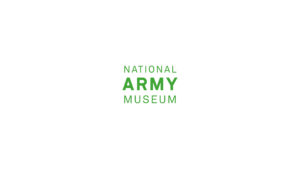