One of the most sought after singers in Ireland, Muireann Nic Amhlaoibh is an award-winning traditional singer and musician from Corca Dhuibhne, Co.Kerry. A leading exponent of the sean nós style, her repertoire also includes songs from a wide variety of folk and contemporary sources. Her childhood in West Kerry saw her immersed in a rich cultural environment and vital living tradition, which was to be hugely influential  on the foundation of her distinctive vocal and instrumental sound.

She has enjoyed a successful career as a touring artist, with over thirteen years experience as lead singer and flute player with the Irish traditional supergroup Danú, as well as a performing as a solo artist.  In recent years she has also collaborated with many artists from other cultures and genres including her lates album “Róisín ReImagined” with the Irish Chamber Orchestra.

Muireann is a popular television presenter, having hosted a range of programmes for Irish and Scottish TV over the past decade including the celebrated traditional music series “Port” and presents her own music shows on RTÉ Raidió na Gaeltachta.

“One of the earthiest and most distinctive voices, not just in traditional circles, but anywhere” – The Irish Times 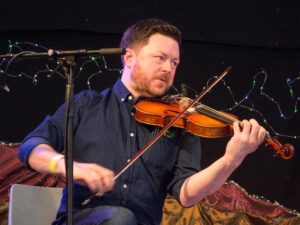 Having inherited a musical legacy of at least five generations of fiddle playing he has toured the world from a young age as both a lead and backing instrumentalist with a number of bands including Lá Lugh, At First Light, Ulaid and the Irish song super group A Stór Mo Chroí. He has composed music for theatre, television and film and has presented music shows for BBC ALBA, BBC NI, TG4, BBC Radio Ulster and Raidio na Gaeltachta. Dónal is also the producer of the recent collaboration between Muireann Nic Amhlaoibh and The Irish Chamber Orchestra “Róisín ReImagined”. 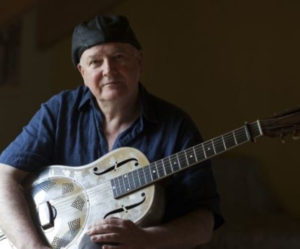 A native of the west of Ireland and reared there and in west Africa, Gerry O’Beirne is a self taught master of the six and twelve string, slide guitar and ukulele and other stringed instruments. Many of his songs have been recorded by well known artists on the Irish music scene including Mary Black, Maura O’Connell and Muireann Nic Amhlaoibh. His own albums have received much acclaim around the world, and he produced and arranged music for many others including Patrick Street, Kevin Burke and Micheál O’Domhnaill.

His writing is a hybrid of the passion found in traditional music and the freshness of contemporary song. Gerry has toured the globe as a solo artist and with the Sharon Shannon Band, Patrick Street, Midnight Well, Andy M. Stewart, Kevin Burke, Andy Irvine, and the Waterboys. He has performed at the White House, opened for the Grateful Dead, and played electric guitar with Marianne Faithfull. He lives near Dingle in West Kerry.