Curiosity, virtuosity and a deep understanding of the Irish tradition are just some of the things that unite this group. Hot on the heels of his critically acclaimed An Irish Viola/Vióla Gaelach album release with Steve Cooney, Sligo fiddle player Seamus McGuire brings the warmth and richness of the viola to the fore in this collaboration. Joining him on viola is Niamh Varian-Barry, a highly accomplished singer, composer and multi-instrumentalist and one of a select few who can move between classical and folk music with ease. Completing the line-up, Gerry O’Beirne is the go-to guitarist for many musicians, and brings his glorious voice as well as his massive breadth of expertise across many genres to the trio.

Audiences can look forward to hearing captivating arrangements of songs and instrumentals as well a brand new Music Network commission. The programme will explore traditional grooves, great melody and the beautiful sonority of the viola.

The event is presented jointly by the Irish Cultural Centre and IMDL (Irish Music and Dance in London).

Niamh is a fiddle and viola player, composer, and former lead singer with Solas. A founding member of the Irish Memory Orchestra, she is one of the select few who can cross easily between classical and folk. Likewise with Séamus Mcguire, who brings all the richness of the viola to his traditional tunes and his sumptuous compositions for the West Ocean String Quartet and the band Buttons and Bows. The go-to guitarist of choice for so many musicians, Gerry O’Beirne brings to the trio his massive breadth of expertise in so many genres and a glorious voice to boot.

Audiences can look forward to hearing captivating arrangements of songs and instrumentals and a brand new Music Network commission by these wonderful musicians.

“Séamus McGuire’s supple tone was a delight, his instrument tracing shapes every bit as distinctive as anything John Coltrane, Ben Webster or Martin Hayes have created” – The Irish Times

“The playing of O’Beirne is superlative and subtle beyond words.”  The Sunday Times

19 musicians from the Collective, In Good Company, will also be supporting on the night: 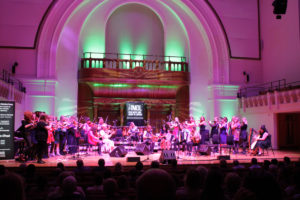 In Good Company (formerly ‘Fair Plé Ladies of London’) This 30-strong group of the finest traditional Irish musicians and singers based in London, first came together as the ‘Fair Plé Ladies of London’ to perform at the prestigious Cadogan Hall in June 2018. The Fair Plé movement was started in Ireland last year by internationally renowned singer/songwriter Karan Casey to raise awareness about and promote gender equality in traditional and folk music (www.fairple.com). The Group went on to perform at the 20 th Return to Camden Town Festival and most recently at an International Women’s Day double bill concert with The Mulcahy Family at the Irish Cultural Centre, Hammersmith.

The group, who have recently been renamed ‘In Good Company’ was founded by Dublin accordion player, Paula Hanley and London fiddler, Karen Ryan. Each group performance features a representation from the 80 female musicians and singers who are committed to the project, and accompaniment by former London Lasses pianist, Pete Quinn. This evening the group will play a number of selections from the repertoire of The London Lasses, followed by a selection of new sets arranged specifically for the International Women’s Day earlier this year, featuring traditional Irish dance tunes composed by prominent female musicians/composers within the genre. This evening ‘In Good Company’ will also present traditional Irish (sean nós) songs, airs and Irish ballads.