The mighty trio ‘Sliabh Aughty’ bring the finest of traditional Irish music from the East Clare/ East Galway region, where the mountain range they are named after, stands proud. There is an infectious pulse to their music and a respectful nod to music of the greats who have gone before them.

Mark Donnellan: East Clare native, fiddler, regular host of the renowned Wednesday evening sessions at Pepper’s Bar in Feakle and son of one of the founding members of the Tulla Céilí Band Francie Donnellan.

Jim Corry: East Clare native, pianist and member of a number of popular céilí bands, including the Swallow’s Tail and the Salamander.

All three musicians are long time members of the legendary Tulla Céilí Band – who marked the band’s 70th Anniversary with their 6th album in 2016.

Sliabh Aughty last appeared in concert in London during the 20th Return to Camden Town Festival, at Kings Place in 2018. We look forward to welcoming them back.

This concert is being presented in collaboration with Irish Music and Dance London.

IMDL’s London wide youth project, The Trad Gathering was jointly commissioned in 2008 by the BBC Proms and Return to Camden Town Festival, bringing together a large number of the most talented and accomplished young traditional Irish musicians from across London and further afield. Each year since 2017, the project has highlighted a different high profile musician who has been long associated with the London Irish music scene. Members of the group learn about the musician’s background and musical activities, are exposed to aural sources of their music, learn tunes from their repertoire, going on to rehearse and perform some of their music in an arrangement suitable for the large group setting. Past performances have included: Royal Albert Hall, Royal Festival Hall, Trafalgar Square stage (as part of the Lord Mayor of London’s St Patrick’s Day Festival), Kings Place, Bush Hall, Cadogan Hall and more.

Led by Karen Ryan (fiddle) and Pete Quinn (piano), this year The Trad Gathering are celebrating music from the repertoire of Offaly accordionist and founder of The Thatch Céilí Band, John Bowe. 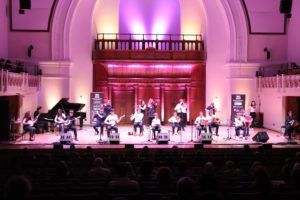