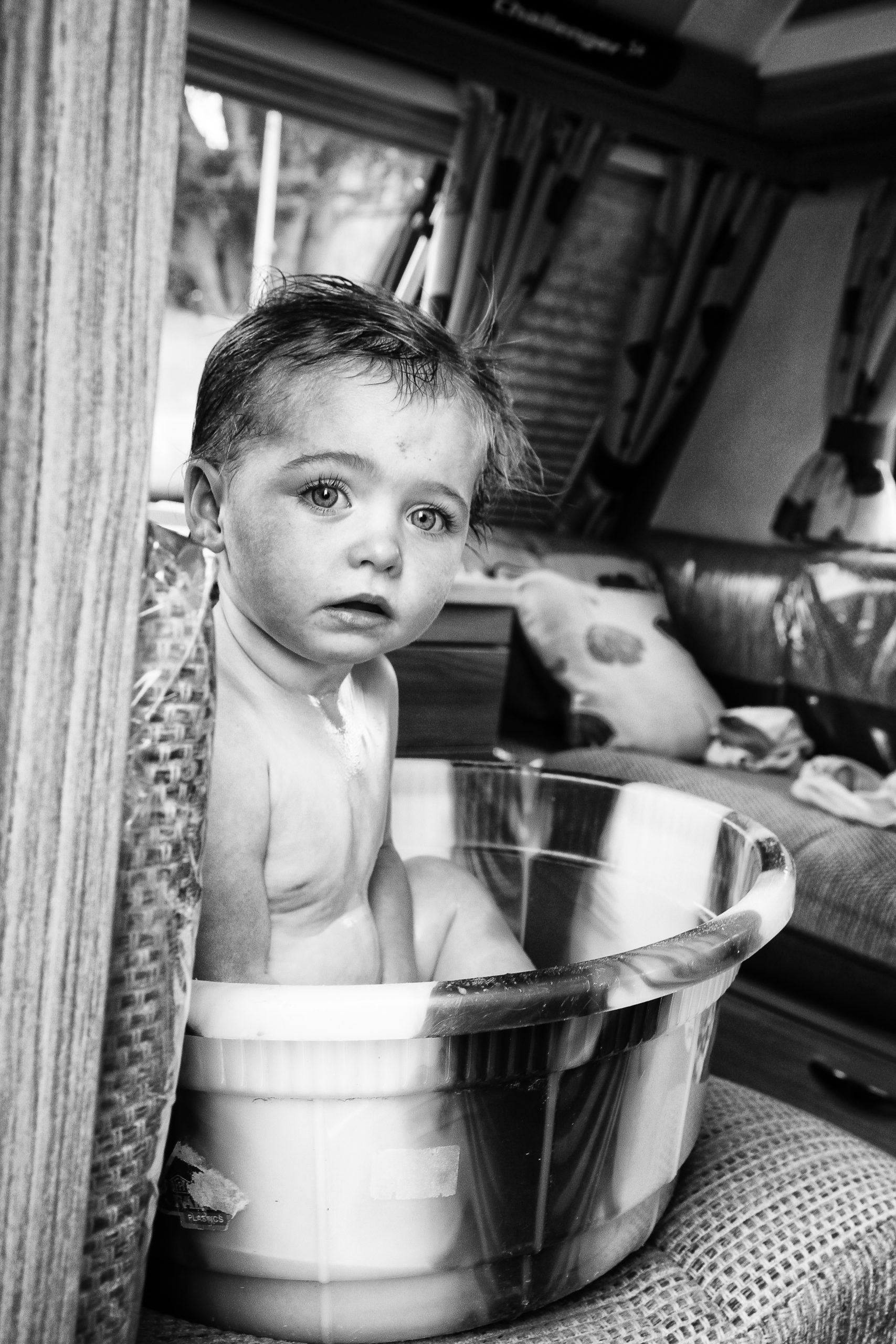 Baby In The Bath; a photograph from the book “Growing Up Travelling” by Photographer Jamie Johnson.

Over the next six weeks, in the run up to “Irish Travellers National Pride Week’ (From Sept 20th – Sept 24th), ICC Digital is delighted to bring you portraits of from the book “Growing Up Travelling: The Inside World of Irish Traveller Children’ by the acclaimed American Photographer, Jamie Johnson.

Jamie Johnson has spent 20 years photographing children from various cultures around the world, and she has been documenting Irish Travellers since 2014. ‘Growing Up Travelling’ is full of Jamie’s evocative and stunning ‘black and white’ images of Irish Traveller children, which captures both the singular culture of the Travellers and the universal joys and challenges of childhood.

Throughout the book Johnson intersperses simple, touching and beautiful comments from the Traveller children’s own mouths, which provides a rhythm to the book and these comments defines Traveller life and culture.

The book has an in-depth forward by Professor Mary M. Burke, (University of Connecticut) who is the author of ‘Tinkers’: Synge and the Cultural History of the Irish Traveller.

In her forward Burke says.. “Jamie Johnson’s volume is a work in which Traveller children living in roadside encampments and halting sites (both legal and illegal) defiantly celebrate their culture in the face of a centuries ­old and ongoing message from settled society that it is a world of little value. Johnson’s photographs, taken in Galway, Limerick, Cork and Tipperary, celebrate the vitality, beauty and cultural pride of minority children to whom such terms are all too rarely applied”.

About Jamie Johnson: Jamie Johnson is a Los Angeles photographer specialising in fine art and documentary projects around children. Jamie’s passion for faces of the next generation has been a life long focus. She has travelled the world capturing images of children and childhood around the globe. From Laos to Cuba, from the Amazon to India and around the world and back, she has found a universality in the world of children and her passion grows stronger with each new adventure. The lifestyles, cultures and traditions of growing up around the world are closely examined in her photos and each connection she makes with her young new subjects creates life-long friendships with the families. Her work has been exhibited Internationally in galleries and museums from New York through to London and Paris and her photos have been published in dozens of magazines. Jamie’s work is in the permanent collection of several museums. She has won top 50 of Critical Mass in 2017 and 2019 and has a huge collectors base of A list celebrities.

Her book “Growing up Travelling” was published in 2020 and it has already won several awards for ‘Best Photo Book’ in 2020. Jamie currently lives in Los Angeles and has two daughters, Lillianna and Violet.

“Growing Up Travelling: The Inside World of Irish Traveller Children”
is Published by Kehrer Verlag, Heidelberg 2020.

The Book is available to buy on Amazon.com  and from bookstores worldwide.

To find out more about Jamie