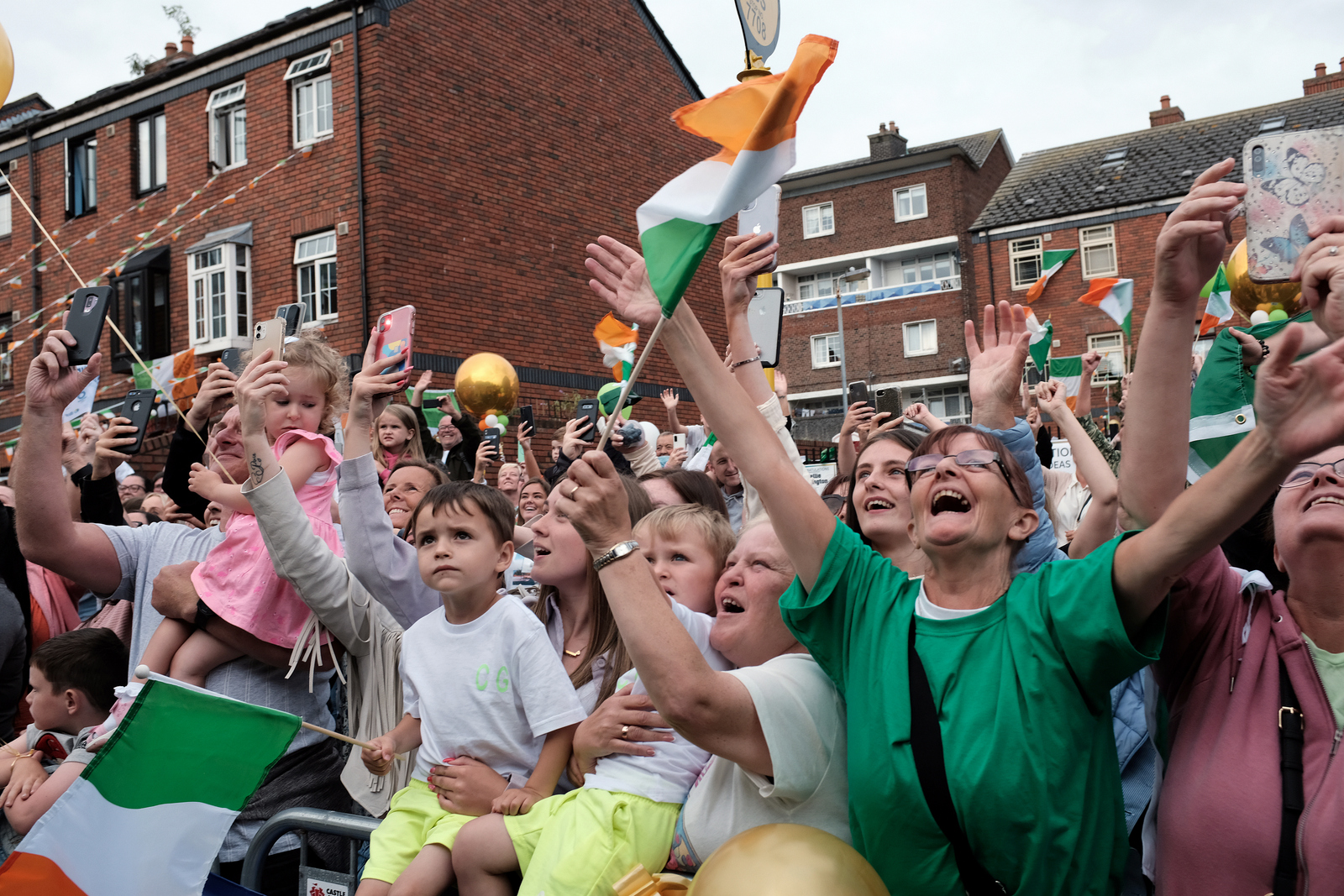 Over the past seven weeks ICC Digital has been delighted to bring you some stunning photographs from the gallery of Dublin’s great Documentary Street Photographer, Barry Delaney. This week, we bring you Barry’s penultimate photograph from his gallery of eight  – and it’s another magnificent image in which Barry captures the warmth, love and deep unity of Dublin’s working class people.

This photo  “Kellie’s Homecoming” with the wearing of the green, the  flying tri-colours, the waving of the hands and all the smiles, reminds us of photographs from days gone by, when the people of Dublin came out in their droves to welcome ‘HOME’ Jackie Charlton and his boys, when they returned to Dublin after playing in the World Cup!  Only in this photograph the people are now filming the home-coming on their mobiles phones, showing us how times can so quickly change – but what Barry captures so beautifully in this photograph is that what remains the same, and what is constant and unshakable is the pure joy and the sense of strong community that these Dublin people share and this photo sings of it, it sings of love, it sings of joy and it sings of “HOME’!

Here is what Brarry says about his. photograph ‘Kellie’s Homecoming’

“When Kellie Harrington won Olympic gold in the summer of 2021 , the homecoming to her inner city Dublin home, was more than an Irish welcome. Ireland had just come out of an 18 month month lockdown, the celebrations on the streets of Dublin were something I had not witnessed since Italia ’90 , like we had won a war, Kellie had”.

About Barry Delaney: Barry Delaney is inspired by the colour, energy and DIY attitude of punk. He fled the grey Dublin of the early 1980s, to travel the world and fell in love with film photography. Eked a living doing various manual and technical jobs. Fifteen years later, Barry began taking pictures again. It started on the streets of Dublin, his home town, and moved on to other parts of Ireland and across the sea to his old stomping grounds in England and America. Barry has had 7 solo exhibitions in Dublin and many group shows, including the RHA and DLR Lexicon, Dun Laoghaire.  In 2019 he completed a retrospective of his inner city Dublin work in the historic GPO, Dublin, along with his debut Dublin book – Stars and Souls of the Liffey – Last year he released  his second book Americans Anonymous, with poems by John O’Donnell at the Gallery of Photography, Dublin.

Barry Delany’s Books:  For his debut book on Dublin’s Inner City, ‘Stars and Souls of the Liffey‘ Barry documented life around Dublin’s urban centre, as it went through many changes, from boom to bust and back to boom. When it was first published, it was accompanied by a  photographic exhibition held at The General Post Office in Dublin. The Book Is now a collectors Item and currently Sold Out.

Barry’s second book ‘Americans Anonymous’ is a pictorial road trip across the United States, a country that, in the wake of Donald Trump, has never been more divided. From East to West by way of the Deep South, in the tradition of Robert Frank and Dorothea Lange, the photographs of Barry Delaney, accompanied by the poems of John O’Donnell, record the lives of ordinary people at an extraordinary time. This Book can currently be purchased at Hi Tone Books– Here is the link to buy a copy :-https://hitonebooks.ie/americans-anonymous/