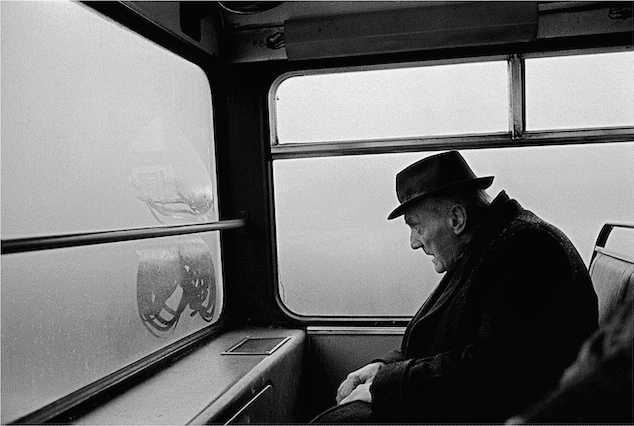 “Man On Bus” – A photograph by Tony O’Shea

This week, in our ‘Artist’s Corner’, ICC Digital brings you the final photograph from the gallery of the great Irish photographer Tony O’Shea. Over the past six weeks we brought you eight of Tony’s captivating and bewitching photographs.

Taken in Dublin in 1984, this powerful, poignant and heart-touching image captures an old Dublin man, who has the history of his home city engraved into his body and his bones. We can see that he has cleared a space on the steamed up window of a double decker Dublin bus, so that he can simply look out and contemplate ..

This photograph were part of the  major exhibition of Tony’s work, which was commissioned and curated by  ‘The Gallery Of Photography, Ireland’. The exhibition was accompanied by a new publication, Tony O Shea’s  “The Light Of Day” (by RRB Books), which has an essay by Irish writer Colm Tóibín.

All of the previous seven photographs from the gallery of Tony O’Shea can be still be viewed on ICCDigital.

Tony O’Shea, now aged 73, is a legendary Irish documentary photographer. His book Dubliners occupies a pivotal role in the history of Irish photography and defines the territory that O’Shea made so inimitably his own – the everyday life of ordinary people, their joys and sorrows, their struggles and triumphs, the rituals that they use to make sense of their lives.

Tony O’Shea studied English and Philosophy at University College Dublin and towards the end of the 1970s he took up photography. By 1981 he’d begun working full-time as a photographer with ‘In Dublin’ Magazine’ and went on to work for ‘Sunday Business Post’. His first book Dubliners,  also included a text by Colm Tóibín was published by Macdonald Illustrated.

We hope that you have enjoyed the gallery of Tony O’Shea on ICC Digital.  We encourage you to buy his book “The Light of Day” and to buy the “Limited Edition Prints” of his Photographs, which are personally signed by O’Shea. They will make a perfect gift for any occasion.